This week, Milo released a survey it commissioned stating that more than half of Kiwi children were getting less than the daily recommended amount of exercise of 60 minutes per day. It revealed that more than half of the parents surveyed struggled to motivate their kids to be active and that they were having difficulty monitoring their child’s nutritional intake.

With these insights in hand, Nestle launched the Milo Champions Squad which includes an activity tracker band (similar to a Fitbit) that syncs to an interactive mobile app and helps kids and parents keep track of physical exercise. The initiative’s also had some backing from Kiwi netball star Maria Tutaia who helped create a series of sporting tips exclusively for the app.

Milo has long positioned itself as a champion for kids and sport, boasting its credentials as a “nutrient rich drink for active kids” with a 4.5 Health Star Rating (HSR). But as many observers across the Tasman have pointed out, Milo’s “nutrient rich” properties actually relies on the false expectation that the beverage will be consumed with a glass of skim milk (preferred by just 13 percent of Australians), not full cream (preferred by 55 percent of Australians). Prepared with full cream milk, the beverage scores just 2.5, while Milo by itself scores just above a 1. 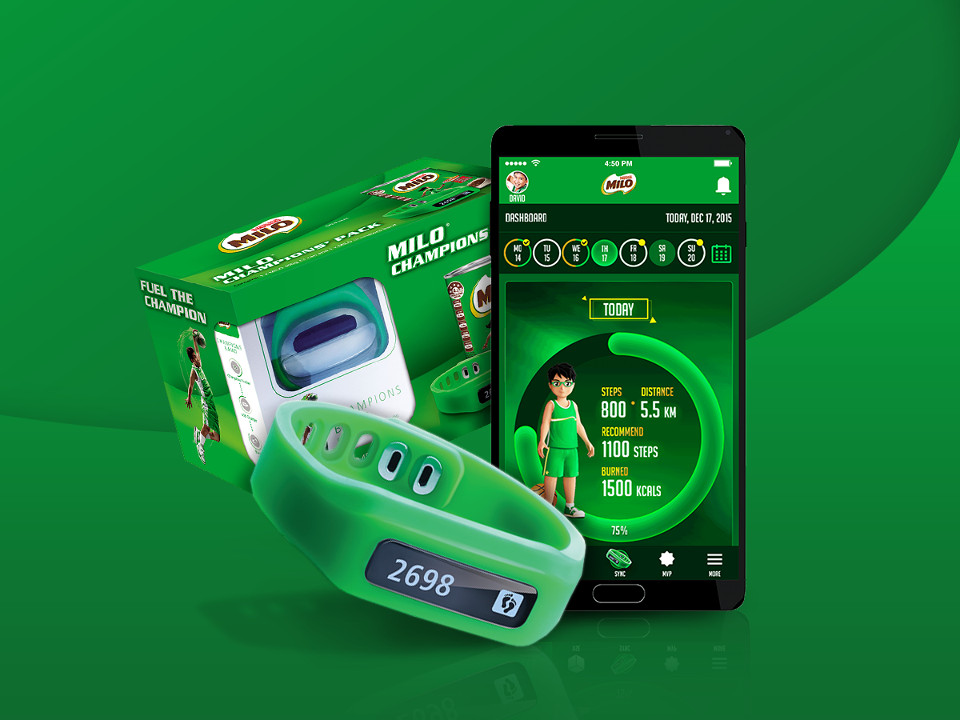 A relatively unhealthy product masquerading as otherwise, with claims backed up by fitness-coated marketing gimmicks, is nothing new. In fact, Milo Champions Squad is highly reminiscent of a Happy Meal campaign McDonald’s launched in North America last year. Instead of including the usual toys that accompany the kid-friendly meals (which now offer ‘healthier’ alternatives such as apple slices instead of fries, or milk instead of soda), McDonald’s distributed ‘Step-It’ activity trackers that would blink slowly or quickly depending on the child’s movements. In addition, the launch of the trackers coincided with the Olympic Games in Brazil, which featured plenty of elite sporting athletes chowing down on the burgers of one of its biggest sponsors. Interestingly enough, McDonald’s quickly issued a voluntary recall of its trackers amid reports its trackers were causing skin irritations, but along with Milo’s recent foray into fitness tracking, it highlights an interesting relation between food and fitness in recent years. As fat and sugar become increasingly villainised, processed food brands have been faced with a dilemma as they juggle the dual desires to engage in the lucrative health trend while still remaining profitable selling the same products it always has. To tackle the situation, brands have turned to exercise and sports as their saving grace.

Coca-Cola, for example, announced a $3 million grant to Chicago’s Garfield Park Conservatory Alliance in 2012 which was intended to establish a wellness programme. It even released a series of videos showing kids and teens exercising under the red-and-white banner of the soda company, an irony that seems to have eluded most of those involved at the time. Then in 2015, Coca-Cola teamed up with a group of influential scientists to promote its own “science-based” solution to the obesity epidemic, one that prioritised exercise over diet.

Specific exercise initiatives aren’t the only way junk food brands have tried to attain credibility in a more health-conscious society. Associating themselves with high-performance athletes have long been one of the industry’s most famous tricks, lending companies not only with a bit of celebrity shine, but an implicit assumption that if these well-toned, highly active individuals can plough through a bucket of fried chicken without consequence, then surely, so can you.

For example, in New Zealand, KFC and Super Rugby, Burger King and Joseph Parker, and McDonald’s and NZ Football have long been in bed together, while overseas, the NBA, NRL, FIFA and the Olympics have had few qualms about putting their support behind the greasy burger business.

Ultimately, these conflicting messages raise two questions. The first question is: can junk food and fitness exist in contradictory bliss? The second question is: is exercise really the great equaliser food brands purport it to be?

There’s a valid argument that in an increasingly tech-obsessed, workaholic society, any encouragement of exercise—regardless of where it comes from—should be considered a good thing. But it’s important to note that in many cases, where a message comes from is just as important as what the message contains. After all, brand association can be a powerful thing: last year, a five-year-old boy was forced to have his teeth pulled from drinking too much Powerade. When he was asked why he drank the sugar-filled energy drink, he replied: “Because Richie (McCaw) does”.

Secondly, while physical activity has many benefits, such as reducing the risk of Type 2 diabetes, stroke and heart disease, exercise as a weight loss tool has largely been proven as ineffective. Research has shown that while 100 percent of the calories you take in are up to you, only around 30 percent of the calories that go out are in your control. Furthermore, increased physical activity often sets off a series of physiological and behavioural adjustments that can undermine any exercise completed. For example, increased physical activity has a tendency to make us hungrier than usual, while it also causes us to excuse certain habits—such as enjoying a refreshing can of Coke—in the misguided knowledge that exercise compensates consumption.

While many of us can assert to knowing the difference between a gratuitous rebrand and a genuine desire to promote health, a large majority of these types of campaigns happen to be targeted at a younger audience. And with the incredible ‘pester power’ of children today, combined with the inability of kids to distinguish advertising from other content, the results of a campaign that promotes such a false equivalence can have serious consequences.

Earlier this year, the Advertising Standards Authority (ASA) released a newly revised code for advertising to children and young people. The latest code places a particular focus on the marketing of “occasional food and beverage products”, largely as a result of the government’s 2015 Childhood Obesity Plan. And while initiatives such as Milo’s Champions Squad is probably unlikely to have breached the terms of the code considering it still promotes a ‘healthy lifestyle’ (along with the fact that it has a 4.5 HSR), it pays for marketers to note the tenuous dichotomy between fitness and food, and that kids—no matter how you frame it—will almost always tend to lap it up.